As a parent, it can be difficult to keep up with the latest potential technology dangers facing our children. So, I was thankful to find the following information about one of today’s very popular Internet games – is your child playing Fortnite Battle Royale? Should you be worried? You might want to get up to […]

As a parent, it can be difficult to keep up with the latest potential technology dangers facing our children. So, I was thankful to find the following information about one of today’s very popular Internet games – is your child playing Fortnite Battle Royale? Should you be worried? You might want to get up to speed on it. 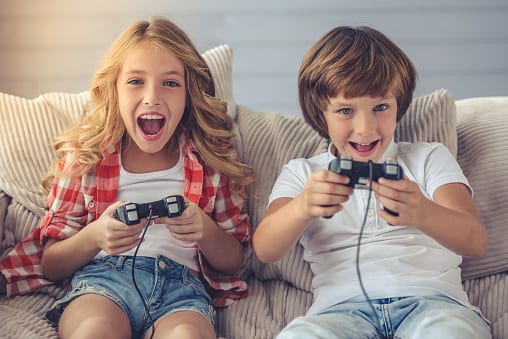 More than 40 million children and adults play Fortnite Battle Royale, and it appears that many are obsessed with it. Fortnite was released last year (2017) by Epic Games. There are two different versions: Fortnite: Save the World and Fortnite: Battle Royale.

Fortnite: Battle Royale is the one that’s popular with children. It’s marketed as a free-to-play game on PS4, Xbox One, PC and iOS devices, but there are also paid versions. It’s one of the first games that let kids play together across numerous platforms. So, your child can be playing on an Xbox and compete with another person on their PC.

So, how popular is this internet game? The developer, Epic Games, rakes in over $1 million a day from Fortnite. And they are getting ready to release an Android version that they say could make $50 million by the end of the year.

What Is Fortnite Battle Royale?

It’s described as a mass online brawl. It begins with one hundred players leaping out of a plane onto an island where they are left fighting with one another, and they fight to the death. This doesn’t sound like something children should be playing does it?

The fighters run around the island looking for weapons like rifles, grenade launchers and crossbows that are hidden in buildings and amongst the landscape. They compete to find these armaments, so they can survive.

They also compete to collect items, so they can build structures to hide in or use for defense. As these resources are collected, the area they compete in is reduced, so the remaining players are forced to fight closer together. Essentially, if you kill everyone else, you win.

Fortnite Battle Royale is a multiplayer game, and in reality, kids are really competing against other kids (or adults). Players can chat with one another over text or headsets. Although Battle Royale is a violent game, humor is part of its appeal. Kids can dress their players in silly costumes and have them perform funny dance moves. They can team up with their friends’ players to fight in duo or squad modes. Up to 100 can play at a time, until one-by-one they’re eliminated and only one survives.

Is this game really for children? How does this prepare a young person to live in a civilized society? It doesn’t. Even though it doesn’t depict blood and gore, it’s simply too violent for children. This is a game for adults, disguised for kids.

Why Is It So Popular?

It appeals to children’s desire to be socially connected with their peers because they can chat and play at the same time. Children are forming real Fortnite teams and spending time together after school playing the game together.

It’s also a huge hit with video game YouTubers. They broadcast videos of themselves playing the game. What this means is that you have adults playing the game with your children. This is another reason to question whether your child should be doing this.

What Should You Do?

Check out the game for yourself. Only you can decide if it’s appropriate for your children. If you decide it’s okay for them to play, consider limiting the time they do so. When they comply, tell them that you’ll allow them to play another game tomorrow. The reward system usually works with kids. The games can last longer than 20 minutes if they succeed in “staying alive,” so keep this in mind.

Also, keep in mind that this game can be very stressful for children. They’ll always be worried that their character is going to be killed. Sit nearby and watch as they play. When you see how stressful this really is, you may decide it’s not something they should be doing.

If they play on a game console, there are parental controls you can apply. You can turn off the chat settings for the game if you’re worried about who they’re talking to. You can also limit how much time they can play. It’s wise to do this before they get “hooked” on it.

If your kids are allowed to purchase the paid versions, talk to them about spending limits and make sure they ask you before making any in-app purchases.

Also, teach them that it’s dangerous for them to share personal information with other players they don’t know, or with strangers online.

As always, try to keep the lines of communication open with your children regarding the online games they play, and their internet habits.